The Listies: Not So Silent But Deadly Fun for Kids

From London to Sydney, South Korea to Edinburgh, Wollongong to Wollonpong, The Listies have travelled the world knocking people out with their fart- (and family-) friendly comedy shows.

As they get ready to drop their latest book “Ickyfoodia“, we take a minute to get to know them a little better… from a suitably safe distance.

For people who aren’t familiar with your best-smelling book, “Ickypedia”, tell us about your new show of the same name and how you went about bringing it to life?

When we realised how important our book was for the education of humanity we knew the world had to know about it, so we adapted it to the stage.

You performed at Melbourne’s “The Arts Centre” over the school holidays, did you try and get them to change the name to “The Farts Centre”?

Yes, we actually did and were temporarily successful. There was a very small 9-point F attached to the front of the building,  but it was in comic sans so no one took it seriously. Also, ‘the green room’ backstage was also temporarily renamed ‘the brown room’ in our honour.

What’s the secret to keeping kids entertained for an hour?

Our motto when making a show is “don’t be boring”. And plus we own 32 bubble machines, toilet paper guns and a 5-metre tall snot monster.

When it comes to your audience, who’s crazier? The kids or the parents? Who laughs hardest?

In your professional opinion, what kind of fart smells more? An SBD or a trumpety-tooter?

At what age do the kids in the audience start turning on you? When do kids start getting serious and stop laughing at fart jokes?

Every act attracts the crazy fans. What’s the weirdest, oddest thing an audience member has done during one of your shows?

It’s not weird or odd, ‘cos we think they are totally great but we do have amazing superfans who make their own t-shirts and hold up signs saying ‘HELLO LISTIES’ and things. And no, it isn’t our mums. 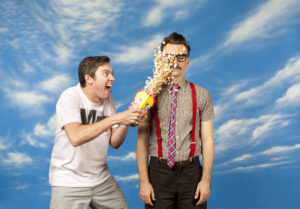 All of comedy’s famous duos featured the straight-guy and the funny guy, and all had one person that appeared to be the victim but ultimately turned the tables. In the age of political correctness where it seems like there are no victims, how do you do comedy that doesn’t have a victim?

OK, you’ve asked a comedian a serious question SO we are going to go deep into clown-theory here, so get your red noses on. As you say, comedy is normally a very moral world (Basil Fawlty is always is punished for being a bully to Manuel) and there are fighty clowns (The Three Stooges, for example) but I don’t think we see straight guy/funny guy as being about victimhood so much; it’s more about rules/silliness or politeness/rudeness or the correct way/shortcuts etc. And kids really get it because they live in a world of being told what to do all the time and of course sometimes they find themselves wanting to break those rules and delight in silliness instead. And that’s what we try and do.

So you need the straight guy to set up the rules of the game, so the funny guy can show that the rules can be cut short or ignored in a delightful, fun or rude way. So it’s not so much Rich is the victim, but that his rigid way of thinking isn’t as right as he thinks it is.

And plus clowns are very much in the moment, so when Rich really is the fall-guy (he gets sprayed with water, for example), it’s only ever for a second, and then he forgets all about it and goes onto the next thing.

The final thing I want to say in this mammoth clown lecture is that the straight guy and the funny guy are actually… wait for it… basically one person (!). They are like two ends of a pantomime horse; this is something that Frank Woodley pointed out to us once, and we think it’s really true. We are all both: aware of the rules, and have a burning desire to break them. To fart in the lift, for example. We KNOW that we shouldn’t, and YET WE REALLY WANT TO!

A good double act shows these internal conflicts that we all have all the time about really small issues and big ones too… like farting in the lift.

How does one avoid a fartquake?

Why didn’t the skeleton go to the dance? BECAUSE THEY HAD NO BODY TO GO WITH!

What starts with a ‘P’ ends in an ’E’ and has a trillion letters in it? A POST OFFICE!

Why don’t seagulls fly over bays? COS THEY’D BE BAY-GULLS (Bagels)

How many books can you put in an empty backpack? errrrrrr… two* ICKYPEDIA and ICKYFOODIA?! (* shameless plug)

Why can’t a nose be 12-inches-long? CLASSIC – COS THAT WOULD BE A FOOT* (* which you literally will only get if you are 40,000 years old – therefore CLASSIC dad joke)

For more on the Listies visit their website here. 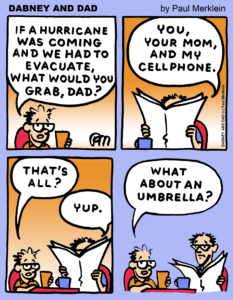