The blog, sub-titled ‘The Ramblings Of A Father Just Making It Up As I Go Along’, boasts almost 25,000 subscribers and a Facebook page with than 30,000 followers.

We caught up with Mike, who lives in Washington D.C. with the site’s ‘characters’, his wife and his two young children, for a chat about blogging, the plight of modern-day papas, and parenthood in general.

Thanks for your time, Mike. Can you elaborate a little on how you’ve grown Papa Does Preach, and how it’s evolved in look and content?

The look of my site has pretty much remained the same from day one. I wasn’t really sure what I “wanted” out of my writing when I started. I wasn’t looking to make a flashy site with a bunch of pop-ups or ads all in your face. I simply found a template I liked and had a pretty funny picture of my son that kind of encapsulated parenting as a whole, and I made that my header. As I’ve grown and started working with brands and do more and more sponsored work, I’ve definitely felt like I need to stand out – and I definitely get nervous that I’m not flashy enough.

But I received some advice a while back from another writer I really respect who told me: “Don’t sweat all that stuff. Let your writing be what draws people to you. You could spend a lot of money upgrading your site, with all the bells and whistles, but if your writing doesn’t speak to anyone, what’s it going to matter? You’re a good writer; focus on that… trust me, people are noticing.”

You give yourself wholly, it seems, to your audience in terms of your relationships and parenting and mental health battles (see articles like “Perfectly Connected”, “The Time My Marriage Almost Ended” and “You’re Not the Child I Hoped For”). Is this something you wanted from the outset, to give an unfiltered view?
Actually no, it’s not. I started this journey in the hopes of being the next hilarious/snarky dad on the internet. Dad and Buried is one of the first dad blogs I found when I was online looking for others to connect with. The first year with my son was really rough, and I was at a loss. Finding humour in writers like Mike from Dad and Buried – he regularly talks about how much he hates his kids (all grins and jokes people; calm down, LOL) – really helped me see that we could still laugh and make jokes, and I wanted to be that too. And while that’s usually the vibe on my Facebook page, when I write… it’s a complete 180-difference.

I mean, I have written a couple funny articles, but it’s just not there when I sit down to write. I think my past and my childhood, as well as my current struggles, outweigh my desire to be funny. In fact, when I started I struggled with that realization for a while. I would see others writing the most hilarious stuff, and when I would sit to do the same, well… it’s like the old saying: “Writing is easy; just sit down and open a vein”… or something like that!

I’ll always remember, shortly after I started blogging, my wife said to me, “I really thought you’d be funnier.” At first that statement kind of hurt… but now, I love what I am. I love that my authentic voice – my vulnerability, my honesty – has helped so many, and given people comfort that they’re not alone. I wish I had that when I was younger.

Oh man, that’s hard because, I think it’s changed so many times since my son was born, and even more since my daughter was born last year. I think being a dad, at least right now, means I have an opportunity to do better than what was given to me as a kid. I have an opportunity to help raise a boy to be a good man; to show him the world in front of him, and how to navigate the craziness that awaits him one day.

To raise and mould (hopefully) another man who will join the ranks of men who embrace their feelings, and not be ashamed of their emotions.

To know that fear and sadness in no way makes them weak, but owning those feelings, and understanding how to communicate them, makes him stronger than ever.

And most importantly, to see his female counterparts, not just his mother and sister, but all women, as equals and values them as such.

And to stand by those who may look, sound, live, worship or love differently than him, and say, “I see you. I support you. I value you, and I will fight for you.”

I want to her resist, persist, and argue with anyone who tells her no – and I also realize that’s going to bite me in the ass someday, LOL.

You could spend a lot of money upgrading your site, with all the bells and whistles, but if your writing doesn’t speak to anyone, what’s it going to matter?

What has been the single biggest challenge fatherhood has presented you?
I’m presented with challenges every day. Whether it’s feeling like I’m failing my kids, or arguing with my wife, or just battling a round of depression or anxiety… parenting is the hardest thing I have ever done. I still struggle with my own selfishness. I’m almost 40, but at times still want to do things I did in my 20s, or even 30s pre-kids – like sleep until noon, or cut loose and drink and play video games all night without any worry about responsibility. That’s probably the hardest thing.
Do you have any advice for new parents doing it tough?First, I would never offer advice, unless they asked me. I don’t mean to sound snarky there [but] getting unsolicited advice, even if it’s good advice, is the worst for new parents.Second, I would offer non-judgmental support, and let them know they are not alone, and that they are doing awesome. If there were or are obvious mental health issues, such as dad or mum exhibiting signs of PPD or any other postpartum issue, I would offer support, but also suggest they talk with their doctor about more options.I have joked since my son was born that parents are our own worst enemies. It used to take a village to raise a child, and now we all avoid the rest of the village because they’re going to be judgmental. We need to get back to non-judgmental support. Who cares if someone raises their kid differently than you, as long as they raise them to not be a dick – isn’t that what’s really important?

I think the mistake I made, in the beginning, was conflating the idea of dads being different now, being better than our past examples, with the idea that men are different, or better, now.

Generally, how do you think the modern dad is faring?

You know, it’s really hard to say. When I joined up with a bunch of other dad writers/content creators in the Dad Blogger Group on Facebook, I really jumped in with both feet. I was all about the “New Dad Movement” in the beginning… almost a little “too much” about it.  And while I still am all about fighting for the equal treatment of dads, I think the mistake I made, in the beginning, was conflating the idea of dads being different now, being better than our past examples, with the idea that men are different, or better, now. One does not necessarily equal the other right now, or ever will. I have seen plenty of examples of men who are killing it as dads (being present; caring for their kids on equal ground with the wives) but are still treating women as less-than.

Not necessarily being mean to women, but promoting the ideas that have put women at a disadvantage for centuries. Until we, as men, stand up to other men, and pronounce that this shit needs to end, and actually fight for equality; it’s going to be hard to ask to be seen as good dads, because our sons and daughters are watching this, and how can we be good dads if we’re not doing everything we can to show our kids they are equal in every way?

What about the modern mum?

Again, it’s hard to say. I could sit here and write an entire book about how I think mums and women have taken steps backward in treatment of men and dads (believe me, I wanted to for a time, LOL), but I’ve come to realize [that] I can’t control what those people think or say about men/dads.

Also, I’m not a mum, so for me to give an assessment of how good or not they are would be not only ignorant for me, but also presumptuous, because I’ve never been a mum, and I don’t plan on being one –  I try and just be the best dad I can be. 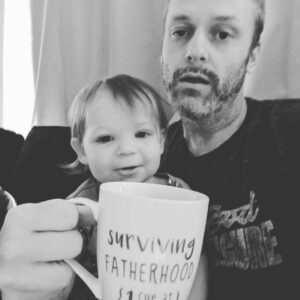 Would you say the tide is turning in acceptance and/or understanding of modern dads and their place as caregivers to their kids?

I’d like to think it is, but as I mentioned before, it’s hard to tell. We have a very long way to go in society, and many more hills to climb, and battles to fight… far more than I’ll be alive to fight in. So, I will focus on doing the best I can while I’m here; hopefully, I make a decent contribution while doing it, and continue to raise the next generation of fighters.

Finally, our Heart Talks question: What are five things your kids should know before they turn 18?

My kids’ generation is going to be, and already is, vastly different than mine, and our upbringings will be almost polar opposite, but, some things never change, and shouldn’t. When push comes to shove, I want both my children to know how to:
– Do their own laundry.
– Sew a button back on their clothes by themselves.
– Change a flat tyre, even in the most extreme conditions.
– Balance a chequebook, as well as manage a credit card.
– To treat everyone with the respect due to all human beings – especially the ones that mistreat them. If for nothing else but to annoy those people!

Bonus: Fart jokes are always funny… and they should be treated as such. Those that say differently don’t belong in their lives.
Agree! Thanks for your time. No problems.