Dan Dougherty is a Chicago-based cartoonist, musician, author and father of one. His much-loved Beardo cartoon series came to a rousing conclusion recently with his ode-to-parenting signoff “I just want to hold her for a bit longer” going viral and wetting the eyes of many a hardened parent.

We sat down with Dan ahead of the birth of his second child.

Thanks for your time, Dan. Tell us a bit about your life as a comic?

Beardo is a comic that I started back in 2006 as a quick creative outlet to tell funny stories about my day job as a barista, and it quickly morphed into becoming a slice of life strip that tackled the humor of being an adult: dating, working, homeownership, falling in love, marriage, and parenting.

That’s a lot of time doodling. Do you still get a thrill out of producing cartoons?

Oh, of course! I love what I do, and every day I try to improve a little bit. Some days are better than others, but I’m proud to say that being an artist is my profession.

You’ve got a wife and one kid, yeah?

My wife’s name is Megan, and my daughter’s name is Audrey. She’s a little over two now, and we are expecting our second child any day now!

What does Audrey think of the cartoons?

She’s still a little young to truly grasp what I’m doing, but I know she enjoys watching me work and “helping” me draw too. She’s also taken to painting regularly, I’ve watched her sit at our patio table watercolouring for an hour non-stop!

Beardo: where did he spring from? From where do you get the ideas for the Beardo comics?

Beardo is definitely me, although a bit goofier than I am in real life. I typically make myself the brunt of the jokes so as not to hurt anyone’s feelings, and if I make a joke at someone else’s expense they’re usually a throwaway character or someone who has been changed enough from the original source. I get most of my ideas from everyday experiences; when I was doing the strip I’d usually keep a notepad or a document on my phone handy to write down moments around me as they happened. My litmus test for a decent idea was that if I could fit it all into one sentence and still think it was interesting, it was worth keeping.

When you looked back over the final Beardo comic upon completion did you have any inkling that you had something special going?

I certainly didn’t think it would reach as many people as it did, but I knew it meant a lot to me. I didn’t go into it thinking it would be the last one, I just knew that I wanted to do this really ambitious strip that went past my usual four-panel boundary. It wasn’t until I finished drawing it that it really got me choked up, and then it occurred to me that it was the ending to book five, which ultimately would be the final book. 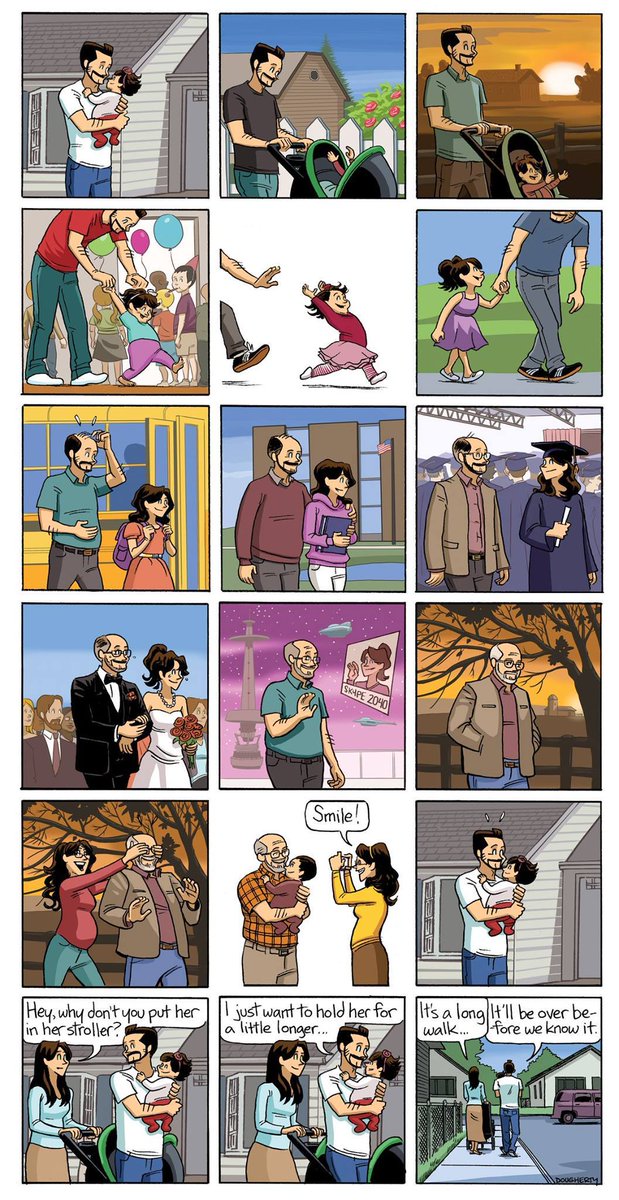 As a dad of three young girls myself, I often notice something – an angle, a reaction, a phrase, an expression – that’s made them seemingly leap a year or two without my noticing; is this something you’re fearful of, your daughter growing up too fast?

Oh, I’m terrified of time slipping past me! You’re absolutely right; there are moments I see my daughter and realized she’s hit a new milestone or grown another inch and there’s this mixture of joy and fear that washes over me. It’s particularly surreal when I see her looking through my phone at her baby pictures, and I think to myself “wow, I forgot you used to look like that” and “when did you learn to use my phone?” and “how did you get my phone?”

Why did you decide to wind up Beardo?

It wasn’t an easy decision, I can say that! A lot of it came down to time, I have more opportunities in comics to explore now than I did when I started Beardo, and I felt it was time to explore them.  Between that, raising a daughter, and trying to see sunlight every now and then, something had to give! The decision was initially a bit easier knowing that I was satisfied with the ending of book five, but in a bizarre twist of fate Beardo’s popularity skyrocketed the second I ended it!

And you’re an author and muso as well?

Yes! I write and illustrate another comic series Touching Evil, which has a Twilight Zone sort-of premise: a woman is given a curse that allows her to kill anyone she touches… if they’re evil. It’s completely different from Beardo both in tone, structure and style (I draw it in a different style entirely). And my band On The Off Chance just released our debut album White Shoes Black Water both on CD and vinyl, and just finished opening for Barenaked Ladies! Suffice it to say, it’s been a pretty cool year.

Your bio page talks about being self-made as an illustrator; I’m sure there have been some bumps along the way?

Oh, of course! That comic on my bio page was more about making fun of my mess than it was about celebrating being self-made. Truth be told, as much as I can take credit for what I’ve done I don’t mean to imply I did it alone! I have a lot of people in my life to be thankful for, not only for being there to help me move forward but also for being there when I slide backwards. Those bumps along the way are always there; I’ve struggled for most of my adult life and I still have obstacles every day. Beardo was a huge repository for a lot of those struggles, I found that if I made fun of my problems then they no longer held much sway over my life.

Do you have any other projects keeping you busy at the moment?

I’m currently working on the second volume to Touching Evil, as well as a follow-up to my band’s album. I’m also illustrating several different comic projects that I’m excited about, but can’t talk about just yet. They’ll come out soon enough though, and people can always get peeks of them on my Instagram page.

I love it. It’s hard to remember not being a dad and it’s only been a little over two years! It’s not always easy but I do enjoy it. It’s also really forced me to tighten up on a lot of things! There are times when I’m trying to explain something to my kid and I hear what I’m saying out loud and realize, “do you have any idea what you’re talking about?”

It means a lot of things, but one of the biggest things I think of when I think of parents is “an example.” I can either be an example of what you should do or what you shouldn’t do, and I’d like to be strong enough to be the former and honest enough to know when I’m the latter.

What’s been your biggest challenge as a dad?

Right now it’s communicating with my toddler. She’s just old enough to talk to but not old enough to have a real conversation with. She’s currently testing her boundaries and our patience, and we are trying to teach her the fundamentals of good behaviour with mixed results! It’s figuring out how to communicate that is our challenge at the moment, but I’m sure there are many more to come!

Finally, our Heart Talks question: What are five things Audrey and the new bub should know before they turn 18?