I became a father for the first time in September 2009.

My social interactions with many family and friends took a backseat during this period as I threw myself into parenthood and my career, but fear not: I had a Facebook account to maintain my contact with the outside world.

And what was not to love about Facebook? I could keep in touch with people around the world at any time of the day or night; let everyone know exactly how I was feeling at any moment; laugh at those hilarious Grumpy Cat memes.

I could even tolerate having to decline daily invitations to play Candy Crush.

But as my career became increasingly stressful and parts of the parenting caper were harder than I had expected them to be, my daily Facebook logins weren’t providing the respite from life that they used to. My attention started getting drawn away from Grumpy Cat and instead to daily images of my 824 closest friends, many of whom were young parents, sharing images of their daily life.

Their posts raised numerous doubts and inadequacies inside me.

Steve and Emma are taking their daughter to Noosa for two weeks… I have only been able to arrange a weekend getaway at Rye. Steve is definitely a better provider than I am!

Paula and Rod are telling me that Saturday morning is all about getting out and about for bike rides with the kids… I just want an extra hour to sleep and stay in my pyjamas… man, I must be an ordinary Dad?

These good-intentioned but one-sided highlights packages and descriptions of other people’s lives chipped away at my self-image as a good parent. The more I felt like this, the more I withdrew socially and the more time I spent on Facebook with reduced feelings of self-worth. 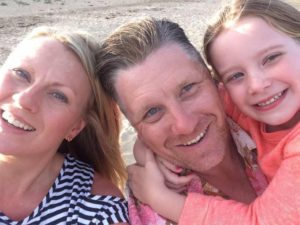 Jason and his girls

Sometime after this I caught up with an old work colleague who was struggling with various family challenges, and he told me that he saw my “perfect family” holiday photos on Facebook and how envious it made him feel and how he wished he could have what I did.

It hit me that I was perpetuating the same myth of a fantasy one-sided life with my own Facebook posts. I took the time to explain to him that, behind the perfectly-filtered photos, smiling emojis and #familyfun captions, I’d had just as many challenges as he had; that I hadn’t posted the holiday pictures of the sunburn, the airport delays, the vomit bags and the arguments over directions.

I have since made efforts to slowly re-connect with old friends in a personable and more meaningful way. This has given me the opportunity to understand the real-life stories of people that aren’t seen in their Facebook pictures, and that many of our family and life challenges are very often no different. The feeling of self-worth that this has given me is far greater than any amount of Facebook ‘likes’ ever could.

I still keep my Facebook account open, but it’s no longer the barometer of how I judge myself as a parent.

And who knows, one day I might even accept that invitation to play Candy Crush.

Jason Cook
Back to Top