My Dad: A Man of Magical Mysteries

In a world where fathers are portrayed as ‘babysitters’ by the media, or either absent or abusive in Hollywood and Hollyoaks, I revelled in being raised solely by my dad when I was a child.

I woke up one day, as a carefree four-year-old, and mum was gone. I was probably alright, but dad was bricking it. He was thrown spectacularly into the deepest end of Parenthood – being forced to raise, nurture and finance a four-year-old and a two-year-old. Alone. Girls, no less. He couldn’t brush his own hair, let alone plait our Rapunzel-length birds’ nests.

Our childhoods, though marred by the absent-mother’s periodic pop-up returns (and swift, unsurprising exits) were dominated by a firm-but-fun father. We had strict 6pm curfews, chocolate was a monthly treat and we only had fruity snacks at school. We were bought plain black flat shoes, had to eat every last morsel on our plates and weren’t allowed to watch soaps on the telly.

He couldn’t brush his own hair, let alone plait our Rapunzel-length birds’ nests…

However, he’d wake us up to a thousand decibels of Led Zeppelin on a Sunday morning – with added soda siphon if we didn’t budge, he’d climb ladders to scare us at our bedroom windows on Halloween, play the classic jumpers-for-goalposts football matches on our local green. He took us on Magical Mystery Tours, letting us press the ‘secret’ buttons in the car, warning us of the ejector seat if we played up. Out of the window of our first floor flat, he threw potatoes at joggers he didn’t care for, he used a megaphone to drive-by ‘tell-off’ people for littering, for wearing silly clothes, for queuing aimlessly for nightclubs. He made us belly-laugh so hard that juice would come out of our noses. He’d let us lie on the couches, past our bedtimes, playing “Across the Universe” on the guitar while we sang.

Fast-forward 26 years and he’s up to his same old tricks. With the woman he remarried ditching him for a billionaire, he is a single father to yet another girl (a ten-year-old, football-loving tomboy scientist, much to his excitement) and he’s doing everything for her he did for us.

Though she gets away with much more than we used to. Not fair. 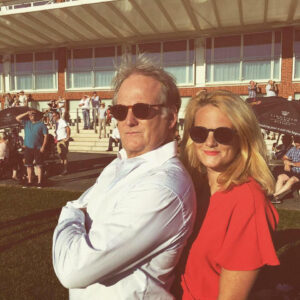 Lotte North, mum to six-month-old Winston and English teacher on maternity leave, recently co-launched The Parent Hood, a social networking group for parents. They run kid-friendly events every month, with a focus on supporting local business and providing mums and dads with a little treat. Follow them on Facebook and Instagram.

Lotte North
Back to Top