Society’s ever-changing face has sparked a greater need for “life coaches”, bringing clarity to those with jostling ideals, negative-leaning emotions and even the art of communication in this world of keyboard correspondence.

The dynamics of parenting – particularly in what’s expected of dads – have also seen a major shake up in recent decades, leaving many blokes floundering.

Spurred by the adventure of raising his now-eight-year-old daughter Tavya, Veal – whose ‘day job’ covers training and development at the Orange County Fire Authority – re-branded his side coaching and speaking business a couple of years ago to better capture his personal ideals.

“Daditude originally came from playing with a blending of dad and attitude, though it’s also come to encompass a lot of gratitude, because that a key part of who I am,” Veal explains. “I advocate for engaged fatherhood, and work to change the misconceptions of the fatherhood, since a lot of media still views fatherhood as what was common a generation ago. Fathers today are becoming more involved at home, and that is creating new challenges as we work to balance that with outdated thinking around workplace expectations.”

Although Veal’s client base naturally attracts blokes with kids, many of Veal’s clients are women, and even non-parents – all of whom share an end goal of becoming better and more engaged versions of themselves. “My tagline of ‘Crafting Your Legacy’ is what people tend to be drawn to,” Veal says. “I think we all want to make a lasting impression and impact that extends beyond our time here, and that’s what I love helping my clients to do; man or woman, parent or not.”

So what, specifically, should individuals expect to get out of it?

“This is largely dependent upon what they’re willing to put in. I’ve worked with clients on improving communication at work and at home; work/life balance; and often on getting greater clarity on who they want to be and show up as in their world. The question is: do you have to interact and be in relationship with people in your life? If so, then coaching can help.”

Veal says his belief in coaching is so strong that he himself has had a coach for years – and, as a learn-as-he-goes dad, will continue to have one. “I think I am more tuned in to connecting with and enjoying each moment; where before she [Tavya] was born I might have had more focus on the future and not really been conscious of being present in the now,” he says. “Fatherhood is a powerful responsibility and an opportunity to learn each day. I love that I get to help shape a life and prepare my daughter to go out and be a citizen of the world, and she also serves as a reminder to simply be the best version of myself that I can be each day. Quite simply, it’s one of the greatest adventures of my life.”

I often tell the rookie dads that the human race hasn’t survived as long as it has because mums have all the answers. Remember that dads may do things differently, and our kids need that variety.

And what about blokes that are struggling with the whole dad thing?

“Reach out and ask for help. Put your pride on a shelf. If you’re struggling, know that you’re not the only one who’s ever had difficulties, and you don’t have to go it alone.”

He continues: “I’d also say, trust your instincts. In the Boot Camp for New Dads workshop I volunteer to lead, I often tell the Rookie Dads (the ones about to become fathers) that the human race hasn’t survived as long as it has because mums have all the answers. Remember that dads may do things differently, and our kids need that variety.

Veal stresses that his biggest challenge in fatherhood hasn’t stemmed from his daughter. “It was in regards to my relationship with my wife,” he says. “Adjusting to our new roles as parents was challenging, and at times it can be easy to lose focus of the relationship you have as a couple, prior to kids. I’ve learned a lot from it, and we continue to work to strengthen our partnership. It truly is a team effort.” 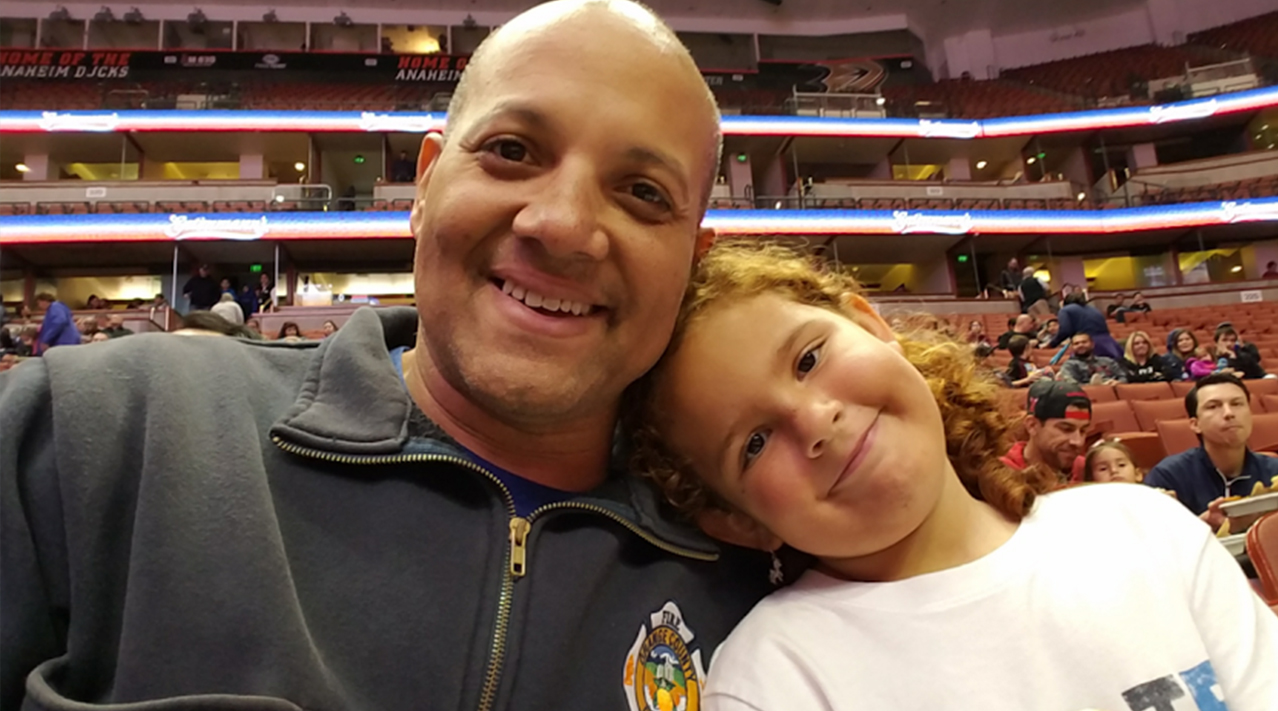 Christopher lives in southern California with his wife of 10 years, Alexsis, and their eight-year-old daughter, Tavya. You can connect with him on Twitter and Facebook.