“Congrats, You’re a New Dad. Now Get Back to Work!”

Parental leave for dads is a big issue for me. I know the rules around it are changing here in Canada which is a step in the right direction. (You can read about the changes here, and the current Canadian laws here.)

I won’t speak about the changes to parental leave in this post; I will, however, talk about my experiences when my two youngest kids were born and I working in Alberta’s oil patch.

Let’s start with my younger daughter. We were living in Provost, Alberta at the time. My wife was pregnant; my oldest daughter was seven years old. I let my company know we were expecting, our due date, and that I would like some time off. I could only use vacation time (two weeks were available) and it would be discussed when the time was near if I was able to use it.

Fast-forward, my wife was close to her due date. I had arranged with my supervisor that my two weeks’ vacation would be used right after the birth. Also, to get a bit of time leading up to that, I was told my family was being transferred to Medicine Hat.

Now the move was great news but I still had to work, had to find a house in another city – and all within two weeks. My wife was left to pack the entire house while I took care of the rest. The day came and off we went.

My daughter was born. I took my two weeks’ holidays. I went back to work after and I was put into training for a week. That way I could be home each night to help. Then it was back to regular work; back out of town. Head office was pissed and I sure heard about it. I was even swapped underneath a new field supervisor. That was the beginning of the end for me there. Hard to stay at a company when you have two kids at home and are being sent 14 hours away for work, weeks on end.

Dads want to be there but, for the most part, our hands are tied.

Fast-forward to my son’s birth. A new company, same field of work, now living in Drayton Valley. I was told two weeks would be given to me right off the hop after saying we were expecting. Things were looking up this time.

I got the phone call while being three hours away in the bush that things were starting. I told my boss to expect a call at any point.

That night my wife woke me: it was time. Loaded her and the kids in the van and off to Edmonton, a 1.5-hour drive away. Called my boss who told me to lock the truck up and the computer in the house and we would talk soon.

In the hospital now, labour is in full force. My phone won’t stop ringing. I get told to go for a walk and answer it. On the line is my boss. He needs the truck ASAP. I tell him my wife is in labour; that I’m in Edmonton, which he knew. Doesn’t matter, so I call my landlord to let my swamper in the house. Call my swamper to say where everything is. Then call my boss back, letting him know what was done and back upstairs I went.

My son was born five minutes after re-entering the room. I almost missed his birth due to work. Next day I call my boss to tell him my son was born, and I will talk to him in two weeks. He informed me I was to be back at work in two days. Our conversation did not go well.

Two days later my truck was back and I was heading to Slave Lake. He kept me out of town for the next week to prove a point. I was done by that point. Time to leave and start a new career. Two months later we were living in Edmonton and I am happy to say, working at a company that puts family first.

Through both of my younger children’s births there was no parental leave allowed – at least that’s what I was told. Both times, companies told me I would lose my job if time was taken off. One supervisor tried to work the system for me but the other made things much worse.

In Canada, dads get treated like this far too often. Countless men I have talked to over the years have had the same experiences. Companies don’t explain that the laws around parental leave. Dads get told to find a new career when wanting time off or questions are asked. The government and media paint the picture that mums only get access to maternity leave; no one else. You never hear that dads can access it. I even have read tons of mum-bloggers writing how dads don’t care or want to be home. This has to change!

Dads want to be there but, for the most part, our hands are tied. Not all dads have been down my road but it does still happen, lots.

Change the stigma around dads taking time off. It needs to be shown we can access the benefit, not just mums. It took me until four years ago to find out that dads could take parental leave here in Canada. Companies should let all parents know and add top-ups where needed. More dads would use parental leave if we knew what was there.

Jeff Wood is a parenting blogger from Edmonton, Canada. He blogs at A Dads Tale. This post has been republished with permission. 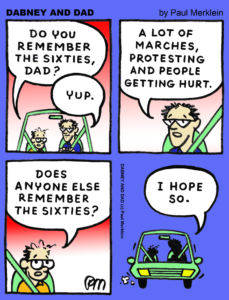