Sitting down to re-watch E.T. the Extra-Terrestrial, I ran through my memories of its release 36 years ago, from the marketing breakthrough of Reese’s Pieces to “Heartlight,” Neil Diamond’s film-inspired hit single. There were suburban bike chases, of keen interest to a then 15-year-old boy, and some heightened moments of acting between a somewhat evenly-matched Henry Thomas and the latex automaton of the title (with no real insult to either of them.) Then there was the John Williams music! It was half the experience back then and, as I’d learn, at least that much today.

But one thing my screening didn’t call back right away was fatherhood, despite my initial certainty that the film would be appropriate for review in a dad-themed journal. This seemed odd for a Spielberg film of the era, actually. Jaws had many father-son moments in its first half, some beautifully done. Close Encounters, in some ways E.T.’s older cinematic brother, was a meditation on the subject at times, with Roy Neary’s (Richard Dreyfuss) own extraterrestrial rabbit hole appearing with the abandonment of his family – a fatherly flaw that kept that film on our family movie-night blacklist for a while.

But E.T. has no adult male lead to speak of. Why?

Hitting “play” I was quickly reminded that the family of this story is a product of divorce. Elliott’s dad has fled to Mexico with his new girlfriend, and Mum (Dee Wallace) is so torn up that she’s become emotionally detached from the kids. Elliott’s older brother Michael, though ill-equipped, does his best as a father stand-in, mediating arguments and grabbing steak knives to investigate strange noises in the night. Rascally Gertie (Drew Barrymore, here 5) has already become jaded, taking no mess and showing no weakness. Elliott himself is now starved for connection, his every interaction an awkward misfire. Everyone in this group (hard to call it a family) is so wounded and insular that we worry about their future.

Into this mess stumbles E.T. 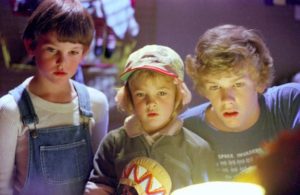 10-year-old Elliott’s near-spiritual bond with the creature becomes so intimate that he soon “feels his feelings” and almost dies a sympathetic death when E.T. falls ill. As this played out on my screen, I wondered why the writer (Melissa Mathison) had linked the two characters so closely. Wouldn’t we cry at E.T.’s death, had he and Elliott merely become good pals? Well, yes. And if this were a simple boy-and-his-dog story, which it threatens to become at first, their spiritual connection might be overkill.

But that’s not the story we’re given. The real story of E.T. – the one I’d half-remembered, coming from divorced parents myself – begins more subtly, at the dinner table, as Elliott is disbelieved about having met a “goblin” out in dad’s old tool shed. Here Elliott divulges his deepest need with a line of dialogue that’s almost a throwaway: “Dad would believe me.”

It suddenly struck me that it was because Elliott’s father had vanished that this film had haunted me into adulthood. After all, what boy hasn’t wondered how much of his father is expressed in him? What grown man hasn’t pondered whether those fragments were there for better or worse? These questions are magnified for boys who’ve lost dad’s influence early on. Elliott is adrift when the film opens, but E.T. gives him the license, and leap of faith, needed to re-invent himself as a young man, despite the loss of this vital roadmap. He does so by providing Elliott the opportunity to trust himself, to love and lose, and perhaps most importantly, to grieve and move on.

That’s a heady accomplishment for a film that had to appeal to little kids for theatrical survival in 1982. E.T. the Extra-Terrestrial is actually a fun, upbeat viewing experience overall, despite how much time its characters spend bawling. The intimacy between Elliott and his new friend is often (wisely) played for laughs. There’s one scene where E.T. discovers alcohol and unwittingly gets hammered. Their psychic link delivers Elliott his first drunk (classic, if outdated, dad territory) and what does Elliot do with this newly acquired “grown-up” energy? He mimics John Wayne and Maureen O’Hara’s classic kiss in The Quiet Man by laying one on a consensual classmate. His dad might be proud.

What boy hasn’t wondered how much of his father is expressed in him?

Elliott continues to gain self-reliance through his E.T. connection until he and his family are confronted by a man billed only as “Keys” (Peter Coyote) who appears as a sort of idealized stepdad; scary at first, then loving and supportive. We learn that Keys has been on the hunt for E.T. since he himself was a boy, and now steps into the light as the validating force Elliott so misses. They even share an “I’m proud of you, son” moment upon E.T.’s death. “I’m glad he met you first,” Keys tells Elliot, with pride usually reserved for one’s own offspring, bringing Elliott’s journey full circle. Indeed, E.T. only exits the movie after connecting each family member with what they’ve lost, much like the little black bag at the end of The Wizard of Oz. Mary sidles up to Keys, Michael is relieved of duty as man-of-the-house to reclaim what’s left of his teen years, Gertie rediscovers her Mom, finally becoming the 5-year-old girl she’d almost let slip away…

And Elliott? He comes to terms with his losses. Loss of his dad, and with that, the son he’ll no longer be. But it’s OK. He’s learned to trust himself.

We never find out if Elliott’s absentee dad has any redeeming qualities, just as some of us never know our own lost dads, left to wonder which parts of them we might treasure or transmit to our children. But the ten-year-old inside of us still connects with E.T. and his lesson to believe in ourselves, to “be good” and move forward.

That’s the power of movies, after all, to hold up a mirror and inspire us toward our own better nature. When we arrive at teaching our own sons and daughters that life really does have some magic in it, despite its harsh realities, we can always turn to our favorite childhood films to help rekindle that light (cue Neil Diamond). We can re-experience the sense of wonder E.T. felt upon seeing our world for the first time and share in his innocence, and that of our own children, for a couple of hours.

Perhaps that’s why E.T. is still a worthy family film, and may continue as one for generations to come.

Tom Gilchrist lives in California where he works in the Visual Effects industry, reviews movies on his Daddy-Daughter Movie Night channel on YouTube, and raises daughter Abigail with his wife, Laura.