Brad Blanks‘ story is set firmly in the Boys’ Own mould. Hailing from Cobram in northern Victoria, he departed Australia for London as a life-of-the-party accountant in 1996, and, save for the occasional whirlwind visit, has seldom graced these shores since.

On one visit to New York he walked into the radio station WPLJ above Madison Square Garden, and asked them for a job covering the Sydney Olympics. They asked if he had any experience and he replied, “No.”

A decade on and he was still a permanent fixture on that radio show.

Brad relocated to New York permanently in 2001 and has since branched out to other media outlets, including CBS FM (where he appears on the Scott Shannon Show), KQRS Minneapolis, and Hamish and Andy in Australia. 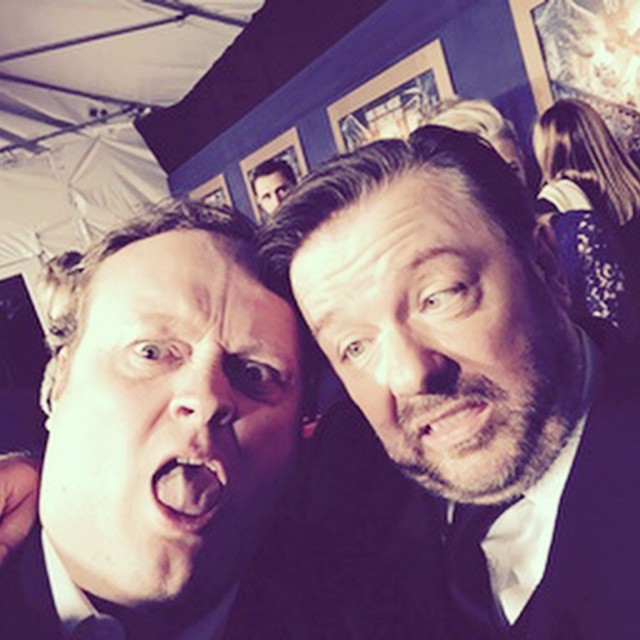 Today Brad interviews celebrities at red-carpet events (his long-running, often-hilarious interactions with Ricky Gervais are a YouTube must-see), profiles folk from small towns across America, and attempts to be a good dad.

He is married to British-born Juliette, who he met in 2002. “She thought she would be barefoot and continually pregnant and living in a vineyard by this stage of her life,” Brad quips. “Instead she lives in midtown Manhattan and after 15 years is finally succumbing to the magic of New York City. This town is very good at grabbing on to you and not letting you escape.”

The pair have three kids: Harvey, 7, Matilda, 5 and Clementine, 3. “Juliette’s life goal is still to be pregnant again but has realized the closest thing to a vineyard these days is a bottle of pinot noir,” Brad says.

Brad offers some insights on his ever-adaptive approach to fatherhood, and the trials and tribulations of raising a family in NYC.

I had to figure out quickly what my role was as a dad.

The first child comes and marriage is transformed. My wife and I were having a great time traveling and going out most nights. It was a full-speed situation early on and then the baby came and that existence changed fast. An “all-hands-on-deck” approach was needed to figure out how raising a baby worked.

Obviously, there’s not much a new dad can do. You look at your super-woman wife and shake your head at her powers to push through tiredness. I attempted a lot of “moral support” in those early days. Not sure the wife actually needed a football coach. She wanted me to get my hands dirty, too. There would be instances where I would snore through a baby crying and she would get up and deal with it. I would get into a bit of strife for this because I sleep like a log! No matter how tough I thought I was as a man I watched that little tiger chew on her breasts and realized that we dads were ornaments in this early child-raising endeavor. Kind of like a garnish on a fine feast!

I overcame my own insecurities on these things and have now learned to add value in other ways. The good thing is that Juliette, I think, has forgotten most of my hopelessness early on. I hope she has.

By the time our third child, Clementine, entered the world, I was in full-action mode, looking after the first two kids as they stepped out of the toddler stage and into being kids. I think this is the time the ‘Real Dad’ role kicks in. I guess it’s like anything when you are learning something new. I started to enjoy the long Saturdays and Sundays: playing games; negotiating what movie to watch if it was cold outside; cooking easy dinners; playing ball games at a park.

Raising a family in NYC is really good fun as there is cool stuff at your fingertips.

We can be at Madison Square Garden to watch the hockey or basketball pretty quickly. We can shoot up the Empire State Building to show the kids the views. We walk to the movie theatre. When diapers were needed they would be delivered within an hour. It is a very “on-demand” existence which made it feel easy. Don’t get me wrong; having a bigger house and a back yard would be amazing. And hopefully that comes one day. But running the kids around town on the subway or in an Uber to be at great things like an art gallery or Central Park keeps us thinking it’s alright for now.  But mathematically a city existence will come to an end eventually.

When I dropped my son off for his first day of school for grade “prep” I was more scared than he was. It was like dropping him off into an episode of 21 Jump Street. Big steel fences, a concrete playground, and a huge concrete square building is where he goes to school still. Within four days I discovered I was wrong to judge the book by its cover. The people there are lovely and sweet and great at teaching Harvey, who is now in 2nd grade.

The school is a ten-minute walk across Park Avenue, down Lexington and then across 34th Street. And then my wife and I can be at our desks within 15 minutes. So from a time angle you can fit a lot in.

Like many of my generation, I’m not my dad.

I used to do a lot of muttering to myself: “My dad never had to do this stuff.” I’m not my dad. I think I used to say that quote in all seriousness and now I say it jokingly. Most dads I know are hands-on. I still get in a lot of trouble because I cut corners as I really want to be on the couch to watch an NFL game at 1pm on Sunday or if I did overindulge on the beers the night before I will be a bit sluggish to make the kids breakfast.  But I’m continually honing this dad game and trying to get better at it – even after seven years!

It’s the ultimate team sport, where you have the superstar player (the mother) and you play the role of Scottie Pippen to her Michael Jordan…

I’ve realized that with the team situation and that as my family has grown I’m going to have a house full of differing opinions. Navigating those waters so that everyone enjoys themselves will underline the dad I’m trying to be.

Setting your morals for your kids and having fun with them is like a good game plan but I think being a great dad is being able to ensure the true star gets to go long in what she wants to do for the kids. I used to see an “activity” with the kids would be taking them to the movies. Apparently, my wish to see the Batman Lego Movie doesn’t align with child activities; it aligns with the kids saying, “Dad’s awesome”, but from my wife’s perspective it doesn’t enrich!

An example of activities suggested by my wife would be taking the kids to a museum for arts and crafts on a Saturday morning. Although I find it difficult to sit on a floor due to my massive frame, I have learned to enjoy these activities as much as seeing the new Pixar movie.

The role of the dad in 2017 can take many different forms.

I’m sure becoming a father changes a lot of dads in different ways. I’ve heard dads say it focused them more. I’ve heard new dads who have already had huge careers say they just want to stay home and play with their kids.

For me, the headless-chicken hustle of the early 2000s has slowed down. Don’t get me wrong. I’m in day-to-day media which is very addictive. Now I work hard at actually stepping off the news cycle and turning off seeing opportunities for a funny radio bit all the time. These days I can sit in the one spot and play games with my kids without checking the baseball scores on my phone every few minutes. I create radio chat around my daily existence as much as I can. So it isn’t juggling and I don’t even know I’m having family time. I wake up and the breakfast table is family time. Dinner time is family time. After-school pick-ups is family time. I’m on an hour-by-hour schedule. If I manage to squeeze out something creative and do something good in my job during all those family-time moments I’ve done alright. 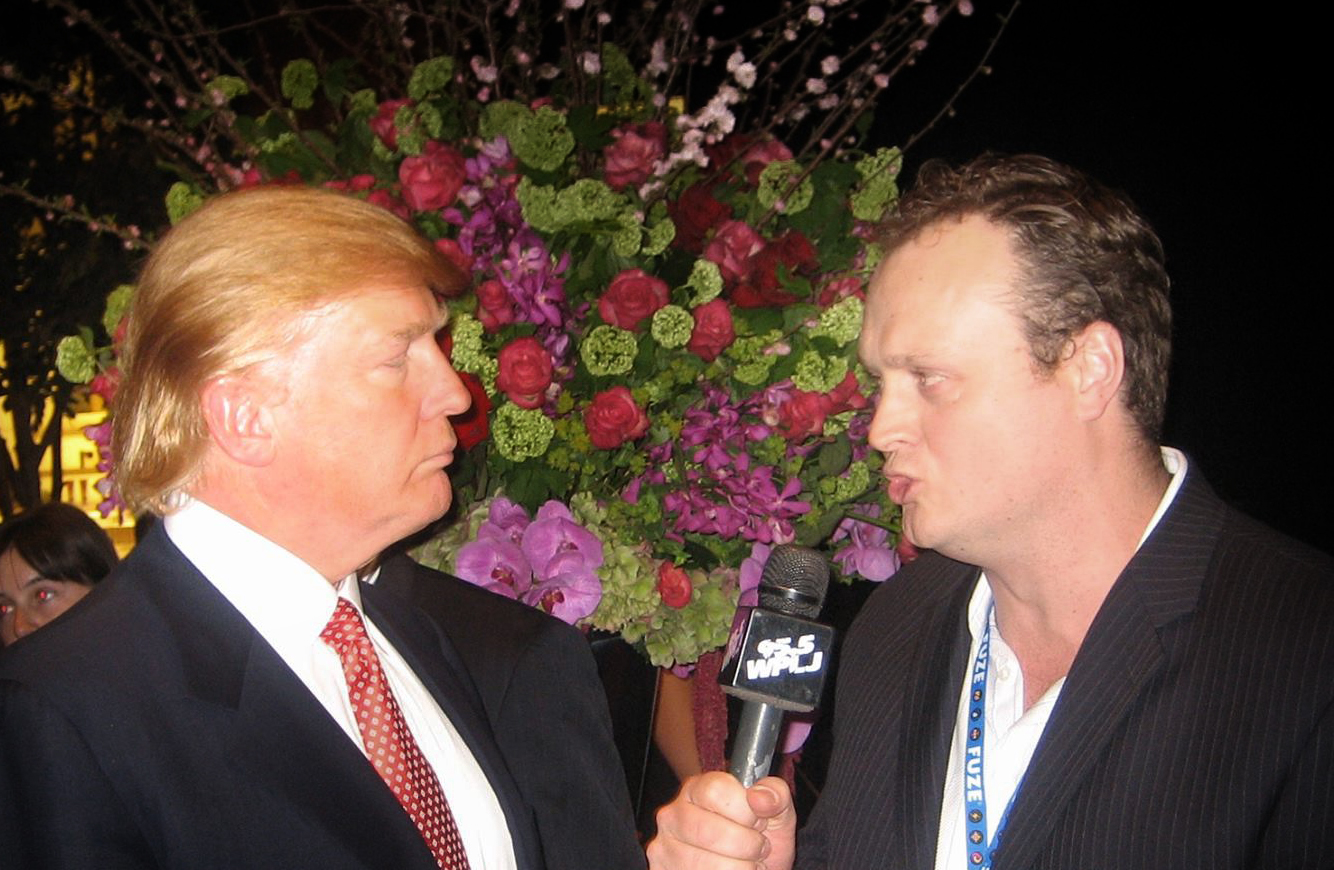 Having words with the leader of the free world – Alec Baldwin.

By the time Harvey, Matilda and Clementine turn 18, they should know:

1. To get serious only at the right moment.
2. To be open-minded to the places and people that you are about to see and meet.
3. To always keep reading.
4. To get really good at smiling and laughing and even crying… I don’t think a computer will be able to do those things in 20 years’ time.
5. To ask questions, then ask more questions, and then really listen to the answers.