Mirrored in the Past, Present and Future

Twin telepathy is a concept shrouded in doubt, but as you’ll see below, 41-year-old identical twins Andrew and Mark Ellis put forward a strong case for its existence. The Liverpudlian pair have taken some time out of their busy lives – they have five young children between them – to field a few questions about the string of outrageous, surely-it’s-a-piss-take coincidences that have punctuated their lives.

TDW: Thanks for your time, fellas. Could you tell us a bit about your childhood?

ME: We were always pretty close when growing up and despite going to different universities initially, Andy followed me to Newcastle which was great. After a few weeks of settling in (during which some of my course mates would swear blind that I ignored them when Andy strolled past them) Andy joined the university football team and once again we had a similar circle of friends.

TDW: One story that sticks out is the twin soccer injuries when you were both 20….

TDW: And you had a few minutes of fame, yeah?

ME: Yes, the story made the tabloid press: “IDENTICAL TWINGE” and “BROTHERS IN (BROKEN) ARMS” screamed headlines. Andy even got fan mail from a young lady who bared all in some raunchy photos (which I obviously kept for over 10 years to refer to in my best man speech at his wedding). 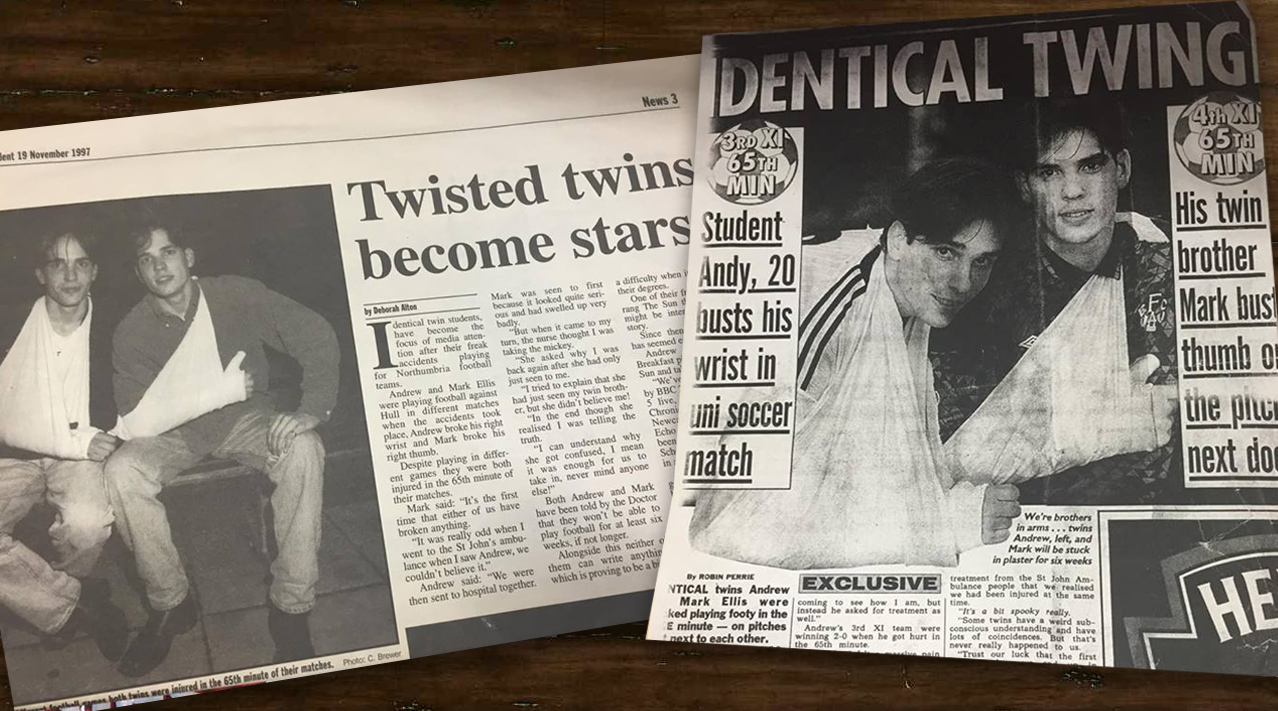 The twins in tabloid heaven

AE: The broken bones incident was bizarre. We were interviewed by The Sun newspaper, and by a couple of national TV and radio shows. I just remember walking off the pitch in agonising pain and seeing Mark in a similar situation. Nothing like that had ever happened before. Even the nurses at the hospital where we went for our scans had never seen anything like it. When I went down for my x-ray the nurse said: ‘What are you doing back here? I’ve just scanned you.”

TDW: Moving along, you both got married in the same year and were best men at each other’s weddings – Mark I think you quipped in your speech that you’d had second thoughts and considered getting a look-alike to step in – and you now live about 40 miles from each other, in Leeds and Manchester. Tell us about some of the coincidences since.

ME: Our closeness has continued into fatherhood, and our first children – my daughter Eve and Mark’s daughter – were born on the same day. They are like sisters and hopefully will be close as they grow older.

TDW: Were they due on or around the same day?

AE: No. Mark’s wife Nic was due in early July and my wife Amanda was due in early August (we’re not that synchronised!). Nic was going in to be induced and Amanda and I went out for a meal high on the prospect of being an aunt and uncle in a few hours. Then that night Amanda went into labour, too.
I remember her sobbing on the way into hospital, gripping the dashboard saying: “I don’t want to have this baby today, I don’t want them to have the same birthday.”
“There’s fuck-all you can do about that now!” was my less-than-sympathetic reply as we sped towards the maternity unit.
Since that day the girls have been unbelievably close. They are more like sisters than just best friends. Not surprising really, given they literally share the same DNA.

TDW: Strewth. Would love to have seen the odds on that happening. And then a few years later, Andy, twins of your own?

AE: Yeah, then came a bombshell three years later. I’ll never forget the scenographer revealing the news. “Well, I can tell you now I can see two babies in there….”
My reaction was one of total shock, mostly focusing on the financial disaster zone of going from one child to three in the space of a few short months.
Amanda was lying there thinking how she was going to carry and deliver twins, while I was mentally totting up the cost of new cars, new pushchairs and the rest.

TDW: But then came the caveat; your twin boys were born on the same date (July 25) as the girls.

AE: Yes! They came six weeks early. Twin pregnancies never normally go to 40 weeks but although we thought it could be close we never really considered the prospect of them all sharing the same birthdate. As it happened, Amanda went into early labour at 33 weeks. I remember having that familiar discussion on the way to the hospital about them all sharing a birthday but to be honest I was more worried about Amanda and the babies arriving healthily to be too bothered about that. On their birthdays it’s just like Christmas Day all over again. Absolute chaos. Paper, presents and toys all strewn around the living room. They just see it as normal now. The nice thing is the boys will be 18 and Annabel 21 in the same year. I’d better get saving up now….

I remember her sobbing on the way into hospital, gripping the dashboard saying: “I don’t want to have this baby today, I don’t want them to have the same birthday.”

TDW: I had three in just under four years and felt sorry for myself; how did you go with three under three?

AE: I think teamwork is the key to surviving such intense and chaotic early years. Amanda and I pretty much split things 50/50. But some lifestyle changes were necessary.
Amanda went part-time (which exacerbated the financial hit even more) and to limit the impact of paying childminders or nurseries even more eye-watering amounts I worked four days a week instead of five. This meant I would look after Ben and James on Wednesdays.

TDW: I’m home with my two youngest each Monday. How have you found it?

AE: Initially, I wasn’t entirely sure it would go. I’d always been a hands-on dad who got involved in everything but this was a new level. I went to a few baby groups where I was the only male in a room of mothers and babies. I felt comfortable but soon gave up going to groups as the boys had plenty at home to entertain them, as well as each other. I’ve done it for three years now and the boys are due to start school in September. It feels like the end of an era in many ways as I have enjoyed their company even though it’s been hard work.

TDW: Any last words on being a dad?

AE: For all the tough moments you experience as a parent, I absolutely love it. They make me laugh every single day. Having three different personalities to guide and nurture as they grow up is a real privilege. I know how lucky I am to have that – although come back to me in 10 years; I may well be wishing they were toddlers again.

ME: It is hard and monotonous at times but they make me laugh and smile much more than they make me grey, and it is amazing to be someone that they both look up to as they find their way in life. There’s some lines from the John Mayer song “Daughters” which resonate for me: “I know a girl / She puts the colour inside of my world / But she’s just like a maze / Where all of the walls continually change.” I sometimes would like to press pause as Eve and Harry grow up (especially Eve who is racing through primary school), but each phase of their development is different and special in its own way, and when there’s nothing you can do about something you just have to embrace it!