Going the Distance: The Story Behind Team Hoyt

Parenting is quite the adventure – exhausting, exhilarating and unconditional all at once.

But every so often we hear about an extra special superhero who captures the very essence of what it means to be a great parent.

Massachusetts dad of three Dick Hoyt, 78, is one such superhero.

In 1962, his wife, Judy, gave birth to their first child, Rick. It was a labour with major complications. The umbilical cord got twisted around baby Rick’s neck, causing oxygen deprivation to his brain. Rick was diagnosed as a spastic quadriplegic with cerebral palsy. The doctors urged the couple to forget Rick – “to put him in an institution, as he’s going to be nothing but a vegetable for the rest of his life.”

But Dick and Judy refused to “put Rick away”, resolving to raise him as a normal child alongside his two younger brothers, Russell and Robert. Their efforts paid off: aided by an interactive computer he graduated from high school and university; he moved into his own apartment; and, with Dick’s help, participated in more than 1,200 running events including 71 marathons (32 of those being the Boston Marathon).

The duo’s foray into the world of running began in 1977, when Rick told his dad that he wanted to compete in a five-mile benefit run for a local lacrosse player who had been paralysed in an accident. Dick wasn’t much of a runner, but agreed to push Rick in his wheelchair. They completed the event, finishing near last, but Rick had caught the bug. That night, as Dick put him to bed, Rick said:

Dad, when I’m running, it feels like I’m not handicapped.

So the duo became “Team Hoyt” and became regulars in local running events. But, as with anything in Rick’s life, it didn’t come easy, and acceptance wasn’t forthcoming. In 1982, when Rick was 20, Team Hoyt applied for the Boston Marathon – and were turned down. The organisers stated the pair had to qualify for the popular event in Rick’s age group, which meant producing a sub-2:50 marathon time as part of their application.

“It was their way of getting rid of us,” Rick recalls. “They said there is no way a 40-year-old man could push his 20-year-old son in a wheelchair and run under two hours fifty.”

Soon after they travelled to Washington D.C. to compete in the Marine Corps Marathon (also known as “The People’s Marathon”) – an event open to anyone than today attracts more than 40,000 participants. Team Hoyt completed the course in 2:45:21, and they were Boston-bound.

Dick’s running progressed rapidly, often winning his age group while pushing Rick (to train while Rick was at college, Dick would run with a 94-pound bag of cement in Rick’s racing chair) and lowering his five-kilometre PB to 17 minutes. 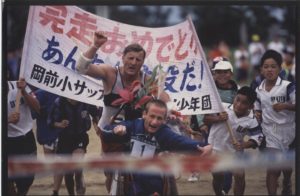 To date, Team Hoyt have completed in more than 1,200 events including marathons, duathlons and triathlons (six of those being Ironman competitions), and in 1992, Dick and Rick biked and ran across the U.S. in 1992, logging more than 3,700 miles in 45 days.

To complete the multi-faceted events, the duo had to be a inventive.  In the swimming stage of a triathlon, Dick would pull Rick in a boat with a bungee cord attached to a vest around his waist. For the biking and running stages, Rick would be seated in a custom-made two-seater bicycle and running chair.

Now 78 and 56, the pair are still going strong, competing in shorter events, having completed their last Boston Marathon in 2014 after plans for a farewell in 2013 were scuppered by the bombings.

Dick says Rick has been his sole inspiration. “Rick is a fighter. He is not a quitter. He is never going to quit.”

As for Rick, he was once asked: If you could give your father one thing, what would it be?

His answer? “The thing I’d most like is for my dad to sit in the chair and I would push him for once.”