Northwest Montana is wild, mountainous and remote. When an epic winter storm knocks out the power, you feel alone, but when your wife is at 32 weeks with your first-born child, and she tells you that things are not right with the baby, and she’s scared – the weather becomes the least of your worries.

Even if the power hadn’t been knocked out by the storm, in the mid-1990s there was no modern internet, and on this night, even the landlines were spotty. So, with little choice, we ventured into the stormy night in our old 4×4 in an attempt to get to our rural hospital. The blizzard made driving nearly impossible, and since this was before cell phones, crashing was not an option.

Once Laura was buckled into the truck, I ran back inside and raced through the house with a giant backpack, stuffing it with everything in sight: a sleeping bag, snowshoes, an ice axe and, being a considerate if not clueless husband, everything in Laura’s underwear drawer.

Arriving at the hospital offered less of a sense of security than we’d hoped. Our doctor, whom we had chosen so carefully, was having trouble getting across the valley floor and it became apparent that this baby would be born in a hospital running on backup power. Also, we quickly learned what a Neonatal Intensive Care Unit (NICU) was, but more importantly, we learned that our hospital didn’t have one. Neonatal Intensive Care Units are in urban centres, and this was something we might have learned in our first birthing class, the one that had been cancelled that evening because of the storm.

But now, the life of my child, and possibly my wife, hung in the balance because we needed access to a NICU, with its equipment and expert staff who specialize in delivering premature babies.

As the storm intensified, the situation was becoming dire. In the first hour of arriving at the hospital, there were times when we all looked at each other without answers. In the best of circumstances, this hospital was simply ill-equipped to get us safely through the delivery of a 32-week baby, and the best we could do was prepare and hope the baby did not come. Laura groaned in pain while the equipment forecasted a progressively worse scenario. But, true to her nature, she remained strong and focused. Between bouts of confusion, she would ask what the options were, and attempt to participate in the conversation. She was on Magnesium Sulphate to slow the contractions, and eventually, she became disconcertingly quiet and disconnected from the decision making. Like most confident women, she knew how she wanted the birth to go down – and she was no longer in the driver’s seat. Nobody was. Things were moving fast.

The nearest hospital with a NICU was in Great Falls, nearly four hours away on dry roads. But on this night the roads might not even be open. The only other option was a flight. We got in contact with the hospital in Great Falls, and after a series of calls, we were told a doctor and his flight team were volunteering to fly over the mountains and get us. But, it would take some time to prep a plane.

The commitment this team was making would be significant. The flight would be over one of the wildest areas in the United States, along the south side of Glacier National Park, and over a million acres of wilderness with no roads or people. Everyone looked at each other, aware that this decision would put more lives at risk. After a long pause, Great Falls dispatch said a decision needed to made quickly because the storm was becoming more treacherous, and the Great Falls airport was closing down.

On our side of the mountains, the storm was also increasing in its ferocity, and the possibility that Laura would deliver en route, either in the ambulance or the plane, made the decision even more difficult. This was all compounded by the real possibility that the plane would have to turn back to Great Falls, or worse, not arrive at all. The flight team was adamant they could make it over the mountains and back, and clearly understood the risks. So, we decided to make a run for the airport.

The short distance took nearly 40 minutes in an ambulance that nearly slid off the road numerous times. But, we arrived at the darkened airport in time to see the plane descend out of the blizzard and touch down hard before sliding precariously out of sight down the runway.

We ran the gurney through the night as the plane appeared again out of the darkness, rolling quickly through the snow, the propellers of the old King Air grinding into the wind. Barely stopping, and with few words spoken, we transferred Laura into the plane, the door was secured and we were off into the darkness, peeling eastward into the storm, working hard to gain enough altitude to get over the gateway peaks of the Swan Range, and the larger mountains beyond.

Laura was strapped down tightly, and it was clear that all planned to deliver the baby on the plane…

The violence of the flight was in stark contrast to the crew’s demeanour. They were calm. All business. Two pilots, a doctor and a nurse. Laura was strapped down tightly, and it was clear that all planned to deliver the baby on the plane. As the plane lurched and dropped, I knew we were already miles into unfamiliar terrain, and I held Laura’s hand while pulling my oversized backpack closer. We held tightly as the plane rolled from side to side, and as the birthing instructions concluded in the low cabin lights, we exchanged looks of understanding. There was nothing more to be done. Fate had brought us into this cramped plane, and fate would deliver us somewhere new, perhaps with a very delicate baby. The doctor nodded and slapped my shoulder reassuringly.

But over the heart of the wilderness, this sense of mission was interrupted by the acrid smell of an electrical fire as smoke filled the cabin. The lights flickered, and then went out. The plane dropped and regained its altitude as someone handed me a fire extinguisher. The engines were whining. With alarm bells sounding, I saw Laura’s face as flashlights lit up the smoky cabin. As the pilots radioed in our situation, I imagined our small plane skirting between the jagged peaks. Again, we were dropping in altitude as the pilot yelled that we could make it. With a small flashlight in his teeth, he said the engines were not impacted by the electrical fire, but we’d be flying on instruments. Several minutes later we were dropping low, on the other side of the wilderness, banking south, and flying low over lonely ranches through the blizzard. Laura’s grip on my hand had come and gone during the flight, but now it returned with force. We were all fighting to get to the hospital.

There is an air force base in Great Falls, so the airport was well-equipped to accommodate an embattled flight-for-life arrival in a storm. After touching down, the plane was chased by a parade of firetrucks, plows and emergency vehicles. Then, in a flash of lights and snow, we were again in an ambulance, working our way through the night, eventually arriving at the trauma hospital, where the story of our journey was already well known.

We settled into a room near the ER, where I was told by a veteran delivery nurse that “…a baby will come when a baby is ready. But, I should not be surprised if Laura went full-term.”

After all, during the flight, her stress levels had decreased.

ADDENDUM:
The calm was short lived. The next day, Laura has a massive hemorrhage and we were raced down the hall for an emergency C-section, and a 3-pound Baby Riley came into the world to the applause of the delivery team. This was in 1996.

Today, Riley is 6-feet tall, races mountain bikes and is graduating, with honors, from Columbia College with a degree in Cinematography.

Laura went on to deliver another boy, Shea, two years later. Shea was over 8 pounds and went full-term. Shea’s birth was picture-perfect. Shea travels the world as a professional skateboarder. His favorite event is in Bondi, Australia. 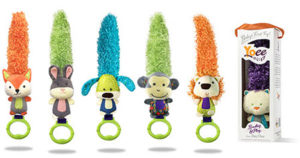 Bill Donavan is a father of two and founder of Yoee Baby, a sensory toy which is “rooted in the early connections with a baby”.
“It’s the first toy designed for bonding through play from day one, without using lights or batteries,” Bill says. “It leverages the new science regarding the importance of early connections, eye contact, sensory stimulation, and talking.”

Bill Donavan
Back to Top