The Dad Who Gets Paid to Drink and Write About Beer

As one of Australia’s premier beer experts, Pete Mitcham earns a living doing what we mere mortals spend a fortune on over the course of our lives.  We catch Pete, a regular contributor to The Dad Website, for a quick ale and a chat about his liquid life  – and being a proud dad to three girls.

Thanks, for your time, Pete. What amber liquid have you to hand while you answer these questions?

Well, Daniel, as a busy dad with plenty on the ‘to-do list’ I’m punching this out at ten o’clock in the morning! So, I’ve gone with a nice simple Hawkers Pilsner. The palate is actually better prepared to taste subtlety and nuance when it is fresh. (Here, let me pour you a sneaky one.)

Cheers. (Sip.) Surely you know how privileged you are to have such a job? I mean, many blokes would kill for it.

Mate, believe me, I wake up every morning, read the Doom and Gloom in the papers and say to myself; “It’s OK! I still get paid money to drink beer.” (What do think of the Pilsner? Crisp and clean but with a nice firm bitterness. Perfectly balanced.)

Let’s detour from beer for a minute – but take your glass with you – and touch on your brood. You’ve three daughters, yeah? Names and ages?

Yeah, blessed with three beautiful girls and a wife who is also a girl so I am well and truly outnumbered in the Pilsner household. Carol, my wife, and I have Cath (21), Laura (12) and Amy (10) so at present I have one in each of University, Secondary and Primary school. BINGO!

What do they tell their teachers and classmates when they’re asked what their daddy does – have you given them a cool, easy-to-remember title to reel off?

My wife worked for many years at a large confectionery company and, after a while, chocolate just became the thing that Mum did for work. Beer is probably the same for them now. They probably speak matter-of-factly about the quantity of beer around the house which manifests itself as jealous comments from teachers, while friends’ parents tend to invite themselves around a lot. They love meeting the men and women in the beer community but get a bit bored with visiting breweries when we holiday.

A serious question. What does being a dad mean to you?

Having that responsibility for someone from the time they are born right through to when they are at their most impressionable and beyond is the greatest honour – and challenge. Steering them to ‘do right’ while allowing them to think for themselves and make their own decisions is a delicate balance.

And another one. What has been the single biggest challenge of fatherhood?

Probably ignoring a lot of the constant crap that masquerades as ‘best practice’ parenting techniques from every peanut with half a Humanities degree and a keyboard. Trusting your instinct, learning from those who know better (like your own parents) and being prepared to change with the times while sticking true to your own life principles. That, and constantly coming up with really good Dad gags. (Another beer?)

Why not! Back to beer, then. How does one get a job like yours?

Do you know where Bendigo is? That’s not where the job opening is, that’s where the queue starts. Bang. Dad gag. The job actually kind of created itself, really. Beer was slowly gaining a new following in the late ‘90s with ‘craft brewers’ emerging, particularly in Victoria. From curating and hosting beer dinners, opportunities arose to work with breweries and venues to host more and more consumer-based events. My Beer Blokes blog led to an opportunity to create and write for Australian Brews News, which is now the country’s most visited industry news and opinion site. 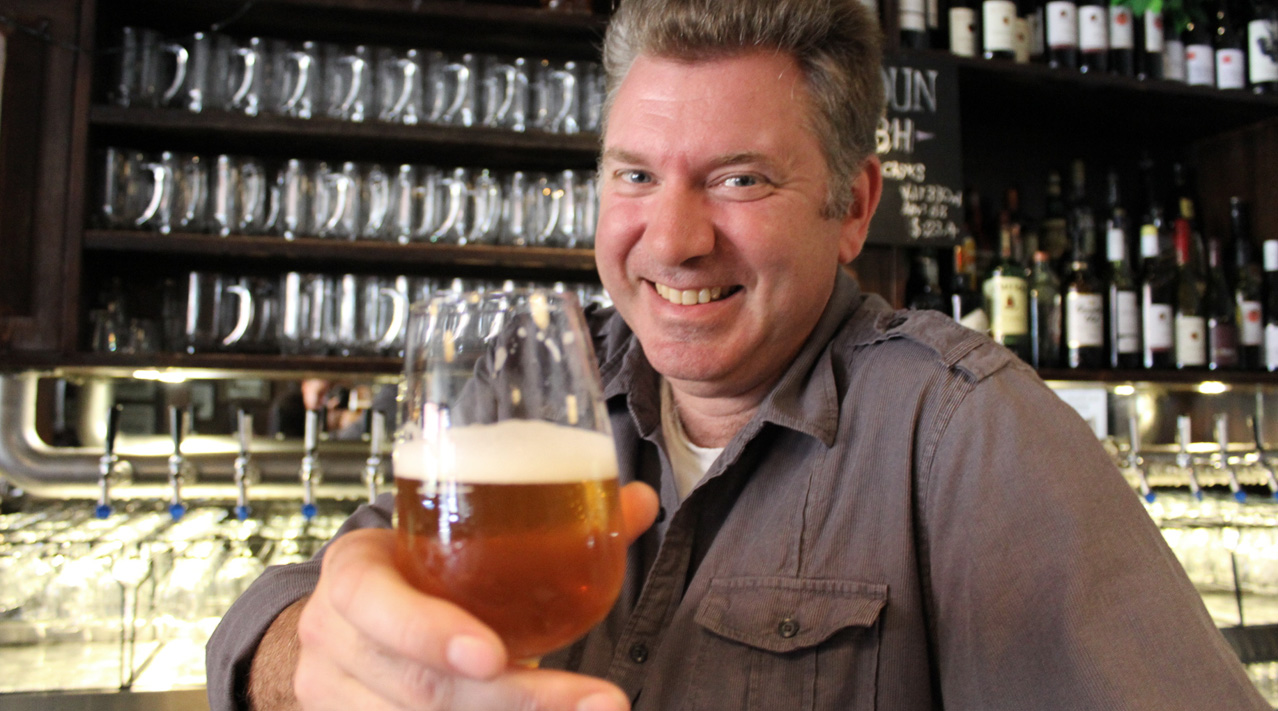 Are you seeing any trends with dads and beer? Are new dads paying a bit more and converting to better beer to compensate for not going out as much?

“Drink less – Drink better” is a mantra that sums it up. We don’t drink nearly as much as we once did but increasingly we are turning to beer made in more traditional and ‘honest’ means from smaller, local and independent breweries.

Given beer is what you ‘do’, how do you go with keeping it ‘in moderation’?

It’s an occupational hazard to have The Beer Fairy (Australia Post and beer couriers) visiting so frequently, delivering treats from so many breweries around the country. You have a responsibility to them to promote their beers and share your opinions honestly and sometimes the hardest thing is to, well, “if you can’t say something nice…” (Unlike this Pilsner. Cracking beer, isn’t it? Crisp. Balanced.) It’s important to have a few AFDs (Alcohol Free Days) to give the old liver a chance to recover and I try to savour a few beers now rather than seeing how many can be downed as perhaps was once the case. Priming yourself with a bit of exercise and healthy eating is a good way to ‘reward’ yourself with a few beers, too.

Prof’s Point of Brew: Why Good Beer is Good For You

Has there ever been a beer you just haven’t been able to stomach?

Yep. But thankfully very few that were poorly brewed. In the same way that I am critical of those who say, “I don’t like beer.” That’s like saying, “I don’t like food.” I am acutely aware that there are so many beer styles out there that are not to everyone’s taste. Only two beers ever have found their way into the sink and one of those I just wasn’t ready for when I first tried it. It is now one of my favourites. The other one still is very not! (And no, I won’t name the two beers. No. Not ever.)

How do you see the future of the union that is dads and beer?

I’m really hoping that this website can give me the opportunity to share what I love so much about beer and put it into some sort of vaguely entertaining and educational context. A better knowledge of how beer is made, how styles have developed and taking the time to listen to beer’s stories leads to a greater respect for beer. It then goes from being a “weapon of mass consumption” (copyright, Matt Kirkegaard, Australian Brews News) to something that the Europeans have long known to be: an important element of a strong, vibrant and energetic national culture.

(Hope that was OK? Another beer?)